The Innovator’s Dilemma: When New Technologies Cause Great Firms to Fail 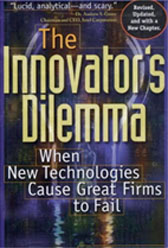 In this revolutionary bestseller, Clayton Christensen demonstrates how successful, outstanding companies can do everything “right” and yet still lose their market leadership – or even fail – as new, unexpected competitors rise and take over the market.  Through this compelling multi-industry study, Christensen introduces his seminal theory of “disruptive innovation” that has changed the way managers and CEOs around the world think about innovation.

While decades of researchers have struggled to understand why even the best companies almost inevitably fail, Christensen shows how most companies miss out on new waves of innovation.  His answer is surprising and almost paradoxic: it is actually the same practices that lead the business to be successful in the first place that eventually can also result in their eventual demise.  This breakthrough insight has made The Innovator’s Dilemma a must-read for managers, CEOs, innovators, and entrepreneurs alike.

“A masterpiece….the most profound and useful business book ever written about innovation.”

Disruptive innovation, a term of art coined by Clayton Christensen, describes a process by which a product or service takes root initially in simple applications at the bottom of a market and then relentlessly moves up market, eventually displacing established competitors.

Some examples of disruptive innovation include:

As companies tend to innovate faster than their customers’ needs evolve, most organizations eventually end up producing products or services that are actually too sophisticated, too expensive, and too complicated for many customers in their market.

Companies pursue these “sustaining innovations” at the higher tiers of their markets because this is what has historically helped them succeed: by charging the highest prices to their most demanding and sophisticated customers at the top of the market, companies will achieve the greatest profitability.

However, by doing so, companies unwittingly open the door to “disruptive innovations” at the bottom of the market. An innovation that is disruptive allows a whole new population of consumers at the bottom of a market access to a product or service that was historically only accessible to consumers with a lot of money or a lot of skill.

Characteristics of disruptive businesses, at least in their initial stages, can include:  lower gross margins, smaller target markets, and simpler products and services that may not appear as attractive as existing solutions when compared against traditional performance metrics.  Because these lower tiers of the market offer lower gross margins, they are unattractive to other firms moving upward in the market, creating space at the bottom of the market for new disruptive competitors to emerge.