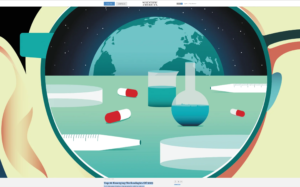 World-changing technologies that are poised to rattle the status quo

One day soon an emerging technology highlighted in this report will allow you to virtually teleport to a distant site and actually feel the handshakes and hugs of fellow cyber travelers. Also close to becoming commonplace: humanoid (and animaloid) robots designed to socialize with people; a system for pinpointing the source of a food-poisoning outbreak in just seconds; minuscule lenses that will pave the way for diminutive cameras and other devices; strong, biodegradable plastics that can be fashioned from otherwise useless plant wastes; DNA-based data-storage systems that will reliably stow ginormous amounts of information; and more.

Together with the World Economic Forum, Scientific American convened an international Steering Group of leading technology experts and engaged in an intense process to identify this year’s “Top 10 Emerging Technologies.” After soliciting nominations from additional experts around the globe, the Steering Group evaluated dozens of proposals according to a number of criteria: Do the suggested technologies have the potential to provide major benefits to societies and economies? Could they alter established ways of doing things? Are they still in early stages of development but attracting a lot of interest from research labs, companies or investors? Are they likely to make significant inroads in the next several years? The group sought more information where needed and honed the list in four virtual meetings.

We hope you enjoy the result, and we welcome your responses.

Our civilization is built on plastics. In 2014 alone, industry generated 311 million metric tons, an amount expected to triple by 2050, according to the World Economic Forum. Yet less than 15 percent of it gets recycled. Much of the rest is incinerated, sits in landfills or is abandoned in the environment—where, being resistant to microbial digestion, it can persist for hundreds of years. Plastic debris accumulating in the ocean causes all kinds of problems, from killing wildlife when mistakenly ingested to releasing toxic compounds. It can even enter our bodies via contaminated fish.

Droid friends and assistants are penetrating deeper into our lives

In industry and medicine, robots routinely build, break down and inspect things; they also assist in surgery and dispense prescription drugs in pharmacies. Neither they nor “social” robots—which are designed to engage with people and to elicit an emotional connection—behave like The Jetsons’ maid, Rosie, or other beloved droids of fiction. Even so, expect social robots to become more sophisticated and prevalent in the next few years. The field seems to have reached a tipping point, with bots having greater interactive capabilities and performing more useful tasks than ever before.

Like most robots, social robots use artificial intelligence to decide how to act on information received through cameras and other sensors. The ability to respond in ways that seem lifelike has been informed by research into such issues as how perceptions form, what constitutes social and emotional intelligence, and how people can deduce others’ thoughts and feelings. Advances in AI have enabled designers to translate such psychological and neuroscientific insights into algorithms that allow robots to recognize voices, faces and emotions; interpret speech and gestures; respond appropriately to complex verbal and nonverbal cues; make eye contact; speak conversationally; and adapt to people’s needs by learning from feedback, rewards and criticisms.

As phones, computers and other electronics have grown ever smaller, their optical components have stubbornly refused to shrink. Notably, it is hard to make tiny lenses with traditional glass-cutting and glass-curving techniques, and the elements in a glass lens often need to be stacked to focus light properly. Engineers have recently figured out much of the physics behind much smaller, lighter alternatives known as metalenses. These lenses could allow for greater miniaturization of microscopes and other laboratory tools, as well as of consumer products, such as cameras, virtual-reality headsets and optical sensors for the Internet of Things. And they could enhance the functionality of optical fibers.

A metalens consists of a flat surface, thinner than a micron, that is covered with an array of nanoscale objects, such as jutting pillars or drilled holes. As incident light hits these elements, many of its properties change—including its polarization, intensity, phase and direction of propagation. Researchers can precisely position the nanoscale objects to ensure that the light that exits the metalens has selected characteristics. What is more, metalenses are so thin that several can sit atop one another without a significant increase in size. Researchers have demonstrated optical devices such as spectrometers and polarimeters made from stacks of these flat surfaces.

4 Medical & Biotech : A Special Class of Proteins Offers Promising Targets for Drugs for Cancer and Alzheimer’s

New possibilities for treating cancer and other ills

Decades ago scientists identified a particular class of proteins driving illnesses from cancer to neurodegenerative disease. These “intrinsically disordered proteins” (IDPs) looked different from the proteins with rigid structures that were more familiar in cells. IDPs were shape-shifters, appearing as ensembles of components that constantly changed configurations. This loose structure turns out to allow the IDPs to bring together a wide variety of molecules at critical moments, such as during a cell’s response to stress. Less flexible proteins tend to have a more limited number of binding partners. When IDPs do not function properly, disease can ensue.

Farmers typically fertilize crops in two ways. They spray fields with ammonia, urea or other substances that generate the nutrient nitrogen when they react with water. And they apply granules of potash or other minerals to produce phosphorus, also in reaction to water. But relatively little of those nutrients makes its way into the plants. Instead much of the nitrogen goes into the atmosphere in greenhouse gases, and phosphorus ends up in watersheds, frequently triggering excessive growth of algae and other organisms. Controlled-release formulations, in contrast, can ensure that significantly higher levels of nutrients reach the crops, leading to higher yields with less fertilizer.

Participants in virtual gatherings will feel like they are physically together

Imagine a group of people in different parts of the world smoothly interacting as if they were physically together, down to being able to feel one another’s touch. The components that will enable such “collaborative telepresence” could transform how we work and play together, rendering physical location irrelevant.

7 Public Health : Advanced Food Tracking and Packaging Will Save Lives and Cut Waste

A combination of two technologies could vastly improve food safety

About 600 million people suffer food poisoning every year, according to the World Health Organization, and 420,000 die. When an outbreak occurs, investigators can spend days or weeks tracking its source. Meanwhile more people can sicken, and massive amounts of uncontaminated food may be discarded along with the tainted items. Finding the source can be slow work because food travels a complex path from farm to table, and the records of those journeys are kept in local systems that often do not communicate with one another.

Together a pair of technologies could reduce both food poisoning and food waste. The first, an innovative application of blockchain technology (better known for managing virtual currency), is beginning to solve the traceability problem. Enhanced food packaging, meanwhile, is providing new ways to determine whether foods have been stored at proper temperatures and whether they might have begun to spoil.

8 Energy : Safer Nuclear Reactors Are on the Way

Controlling carbon in the atmosphere will require a mix of energy technologies—potentially including nuclear reactors, which emit no carbon but are seen as risky because of a few major accidents. That risk could be greatly reduced.

Commercial reactors have used the same fuel for decades: small pellets of uranium dioxide stacked inside long cylindrical rods made of a zirconium alloy. Zirconium allows the neutrons generated from fission in the pellets to readily pass among the many rods submerged in water inside a reactor core, supporting a self-sustaining, heat-producing nuclear reaction.

Trouble is, if the zirconium overheats, it can react with water and produce hydrogen, which can explode. That scenario fed two of the world’s worst reactor accidents: the 1979 potential explosion and partial meltdown at Three Mile Island in the U.S. and the 2011 explosions and radiation release at Fukushima Daiichi in Japan. (The 1986 Chernobyl accident was caused by faulty reactor design and operation.)

9 Medical & Biotech : DNA Data Storage Is Closer Than You Think

Every minute in 2018, Google conducted 3.88 million searches, and people watched 4.33 million videos on YouTube, sent 159,362,760 e-mails, tweeted 473,000 times and posted 49,000 photos on Instagram, according to software company Domo. By 2020 an estimated 1.7 megabytes of data will be created per second per person globally, which translates to about 418 zettabytes in a single year (418 billion one-terabyte hard drives’ worth of information), assuming a world population of 7.8 billion. The magnetic or optical data-storage systems that currently hold this volume of 0s and 1s typically cannot last for more than a century, if that. Further, running data centers takes huge amounts of energy. In short, we are about to have a serious data-storage problem that will only become more severe over time.

A roadblock to sustainable energy solutions is coming unstuck

The way the world gets its electricity is undergoing a rapid transition, driven by both the increased urgency of decarbonizing energy systems and the plummeting costs of wind and solar technology. In the past decade electricity generated by renewables in the U.S. has doubled, primarily from wind and solar installations, according to the Energy Information Administration. In January 2019 the EIA forecast that wind, solar and other nonhydroelectric renewables would be the fastest-growing slice of the electricity portfolio for the next two years. But the intermittent nature of those sources means that electric utilities need a way to keep energy in their back pocket for when the sun is not shining and the winds are calm. That need is increasing interest in energy-storage technology—in particular, lithium-ion batteries, which are finally poised to be more than just a bit player in the grid.

For decades pumped-storage hydropower, a simple process that features reservoirs at different elevations, has been the dominant large-scale energy-storage method in the U.S. To store energy, water is pumped into the higher reservoir; when that energy is needed, the water is released into the lower reservoir, flowing through a turbine along the way. Pumped-storage hydropower currently accounts for 95 percent of U.S. utility-scale energy storage, according to the Department of Energy. But as efficiency and reliability have improved, and manufacturing costs have tumbled, lithium-ion batteries have surged. They account for more than 80 percent of the U.S.’s utility-scale battery-storage power capacity, which jumped from just a few megawatts a decade ago to 866 megawatts by February 2019, the EIA says. A March 2019 analysis by Bloomberg New Energy Finance reports that the cost of electricity from such batteries has dropped by 76 percent since 2012, making them close to competitive with the plants, typically powered by natural gas, that are switched on during times of high electricity demand. To date, whereas batteries have largely been used to make brief, quick adjustments to maintain power levels, utilities in several states, including Florida and California, are adding lithium-ion batteries that will be able to last for two to four hours. Earlier energy research firm Wood Mackenzie estimated that the market for energy storage would double from 2018 to 2019 and triple from 2019 to 2020.