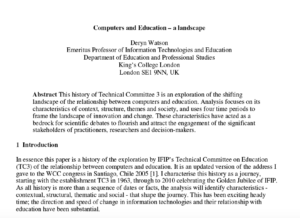 Abstract This history of Technical Committee 3 is an exploration of the shifting
landscape of the relationship between computers and education. Analysis focuses on its
characteristics of context, structure, themes and society, and uses four time periods to
frame the landscape of innovation and change. These characteristics have acted as a
bedrock for scientific debates to flourish and attract the engagement of the significant
stakeholders of practitioners, researchers and decision-makers.